Our remaining time in Shelter Bay Marina was filled with trips into Colon and Panama City to provision for the next 7 weeks. 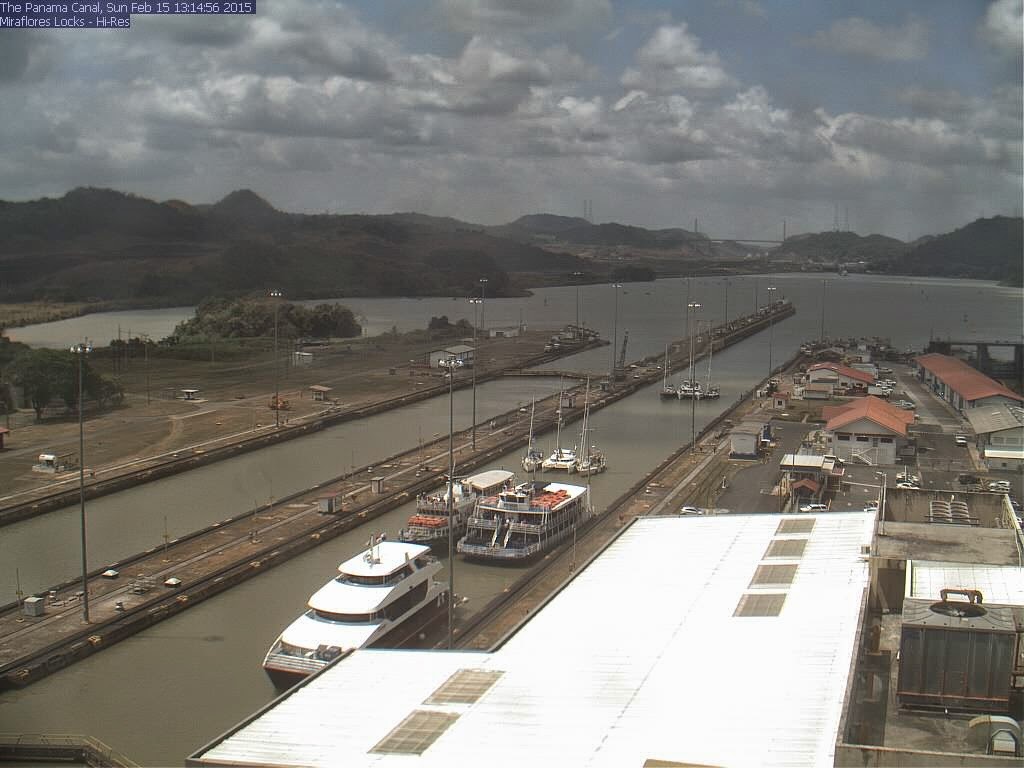 We started our passage through the Panama Canal at 6:39 PM local time upon our entry into the Gatun Locks with Maurice our pilot safely guiding us through the rafting up process where we are tied to another boat OM who also had No Regrets tied to her other side. A bit of trivia.  A boat is always referred to as a she.  We entered the locks behind a much larger ship and had several boat lengths between her and the 3 of us rafted together.  We had several boat lengths between us and the gates of the locks.  We also had to have 4 line handlers as well as a helmsman on board so we had Abdel a line handler that was arranged by a local agent Teto. As you can tell the canal has very strict rules that you must follow.  Even though we are rafted to another boat and only needed 2 people to handle lines you are required to have 4 just in case for some reason you are unable to go through the canal as planned because one of the boats have a problem.


On with the trip through the canal.  Upon entering the locks 4 guys on shore throw a line to the bow and stern of the 4 corners of the rafted boats. The ropes they throw have a rubber ball on the end. The guys then walk along the side of the locks as you drive into them.  The pilot of the center boat tells them which spot to tie the lines.  We then feed the heavy lines up to these canal workers who loop them over the cleat and then we tighten the lines on the boat on our cleats.  The gate locks close and the water boils in moving the boat around. As we go up you tighten the line to keep the rafted boats in the center of the locks.  Each lock raised you 9 meters up.  Once at the top the middle boat puts it in forward and the pilot of the middle boat blows a whistle and you loosen the 4 lines and the canal worker removes it from the cleat. You then pull the heavy line back onto your boat and the Canal Worker carries the lighter line while he walks to the next lock.  When he reaches the stairs to climb to the next lock you need to hold the lighter line high so it does not catch on anything.  You then follow the same procedure through the next 2 locks.  The next 2 locks were much more turbulent and the rafted boats moved further away from the wall we were against due to the currents generated by the filling of the locks. After we were raised up the 3rd lock (28 metres in total over the 3 locks) the Canal Workers just dropped the lines into the water after removing the lighter lines they had thrown to us prior to entering the first lock.  After leaving the 3rd lock in the dark we separated the 3 rafted boats and the pilot boat picked up the pilot.  We then proceeded to a mooring ball where we rafted up to Capricho (a 56 foot catamaran that had 3 levels). 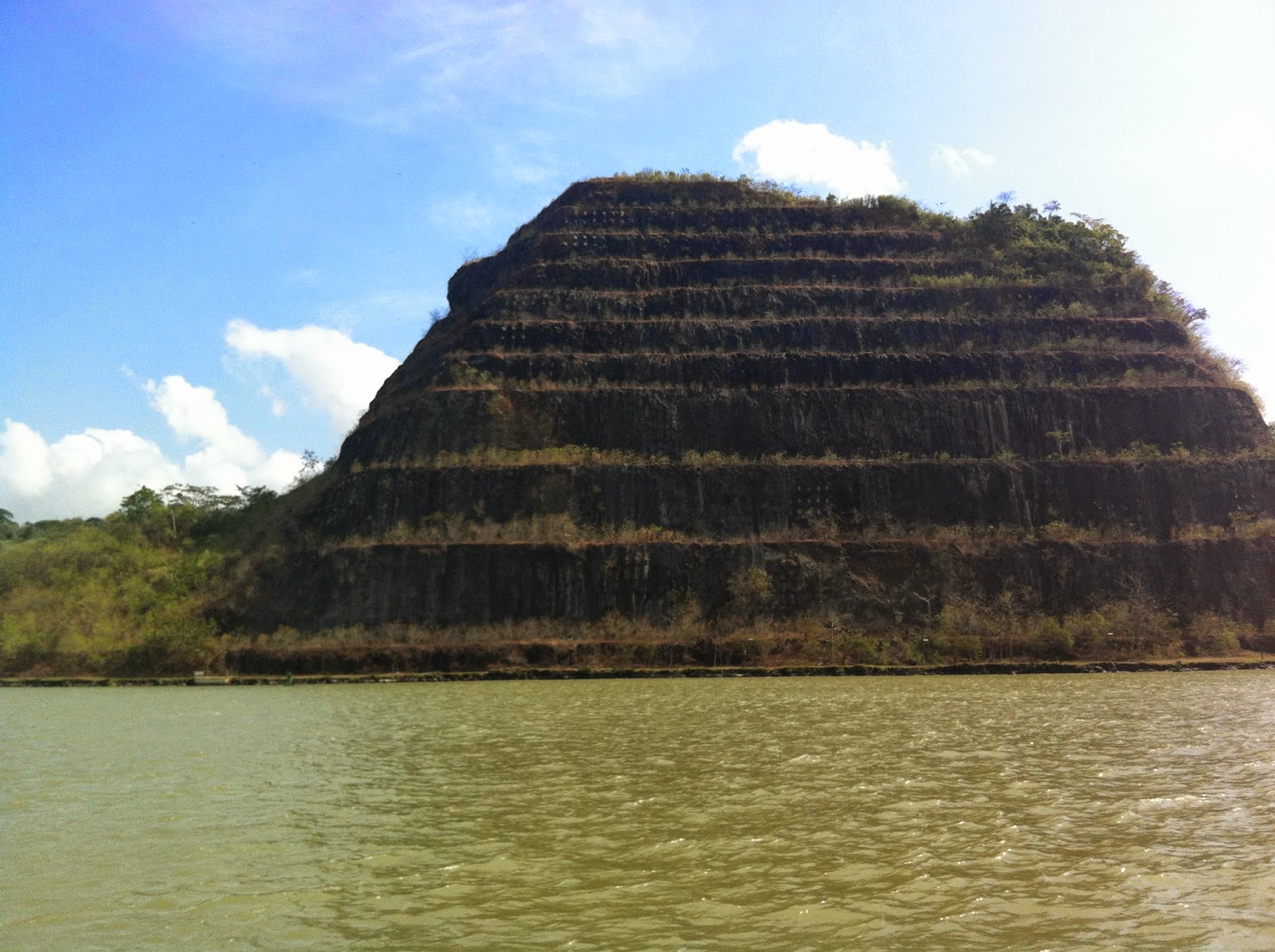 
The next morning our pilot Oscar arrived at 6:17 AM and we separated from Capricho and passed through Gatun Lake past the mouth of the Chagres River into the Gaillard cut which was the most difficult part of the canal to build in 1902 to 1914.  Then under Centennial bridge to the Pedro Migul locks where we waited.  We rafted up with OM in the middle and Coconut Woman on the other side of OM.  We entered the locks at 12:30.  The procedure was the same except we let the lines out rather than pulling them in as the water left the locks.  It was a much less turbulent decent. The water just disappeared. The lines were released and OM motored out into Miraflores Lake (about a kilometer long) and into the next locks.  There were 7 boats in the locks together. Our raft of 3 boats and 2 other rafts of 2 boats each.  Down 2 more locks and out into the Pacific Ocean where all the boats separated.  We then passed under the Bridge of the Americas, our pilot was picked up by a pilot boat.  We proceeded to Balboa Yacht Club where Abdel was picked up along with the tires and lines we rented.  We proceeded to the La Playita Yacht club where we anchored.


The original plan was to head directly to Galapagos Islands once we departed the Canal. Because this is Carnivale weekend we were unable to check out in Colon so we are required to stop in Panama City to have our passports stamped and to check out.  As we are waiting fireworks are exploding over Panama City.  A real sight to behold. 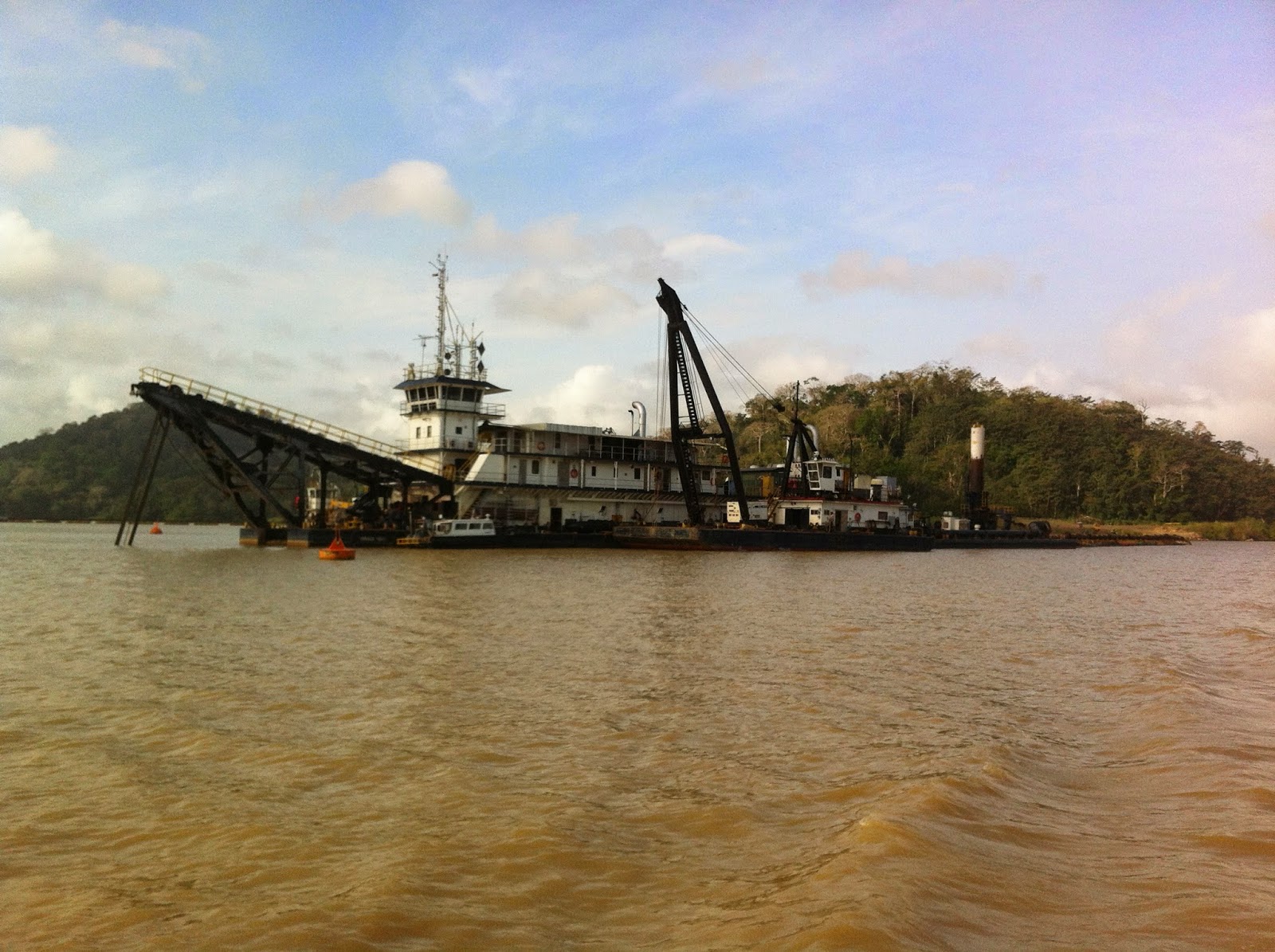 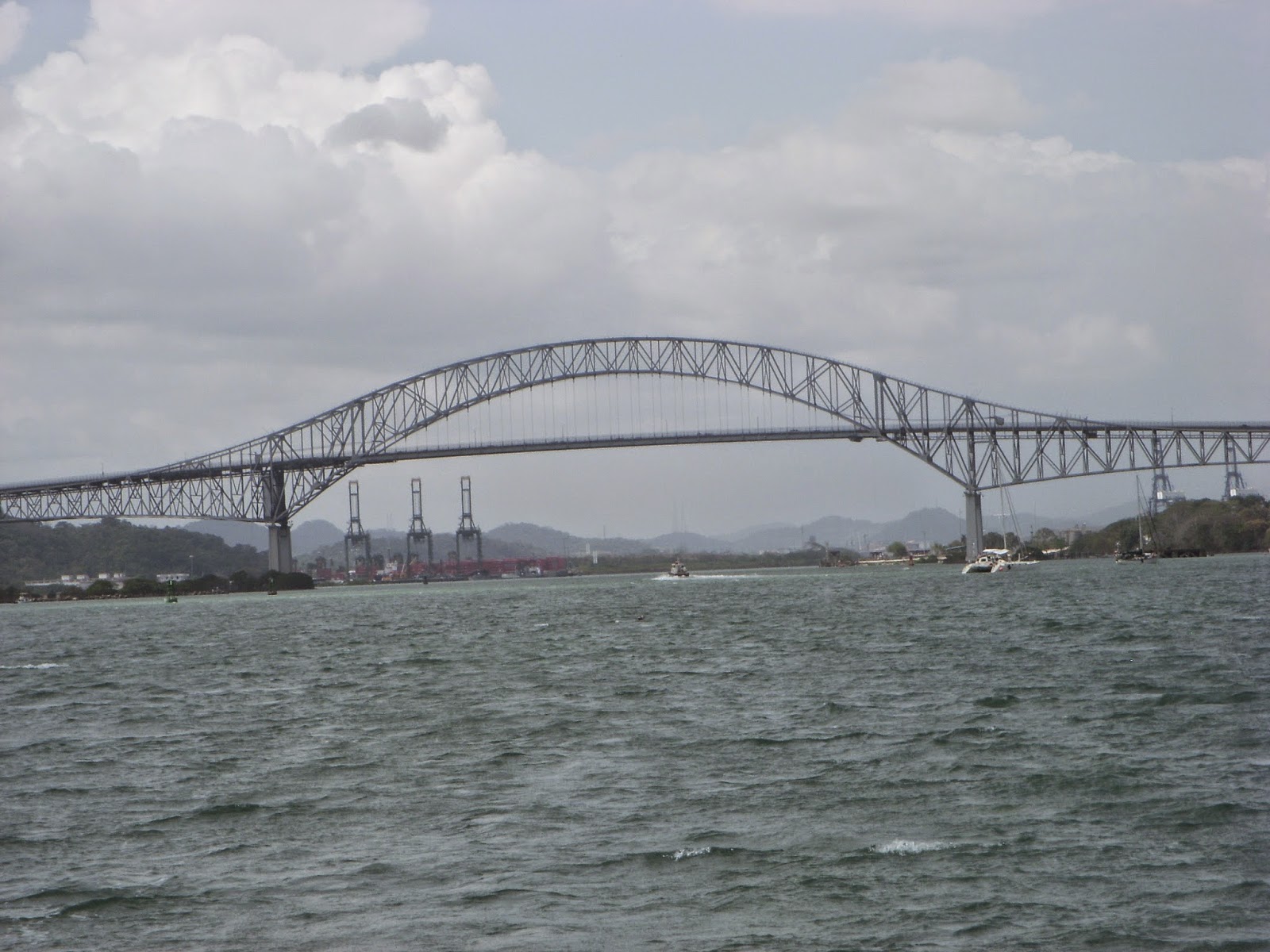 Bridge of the Americas 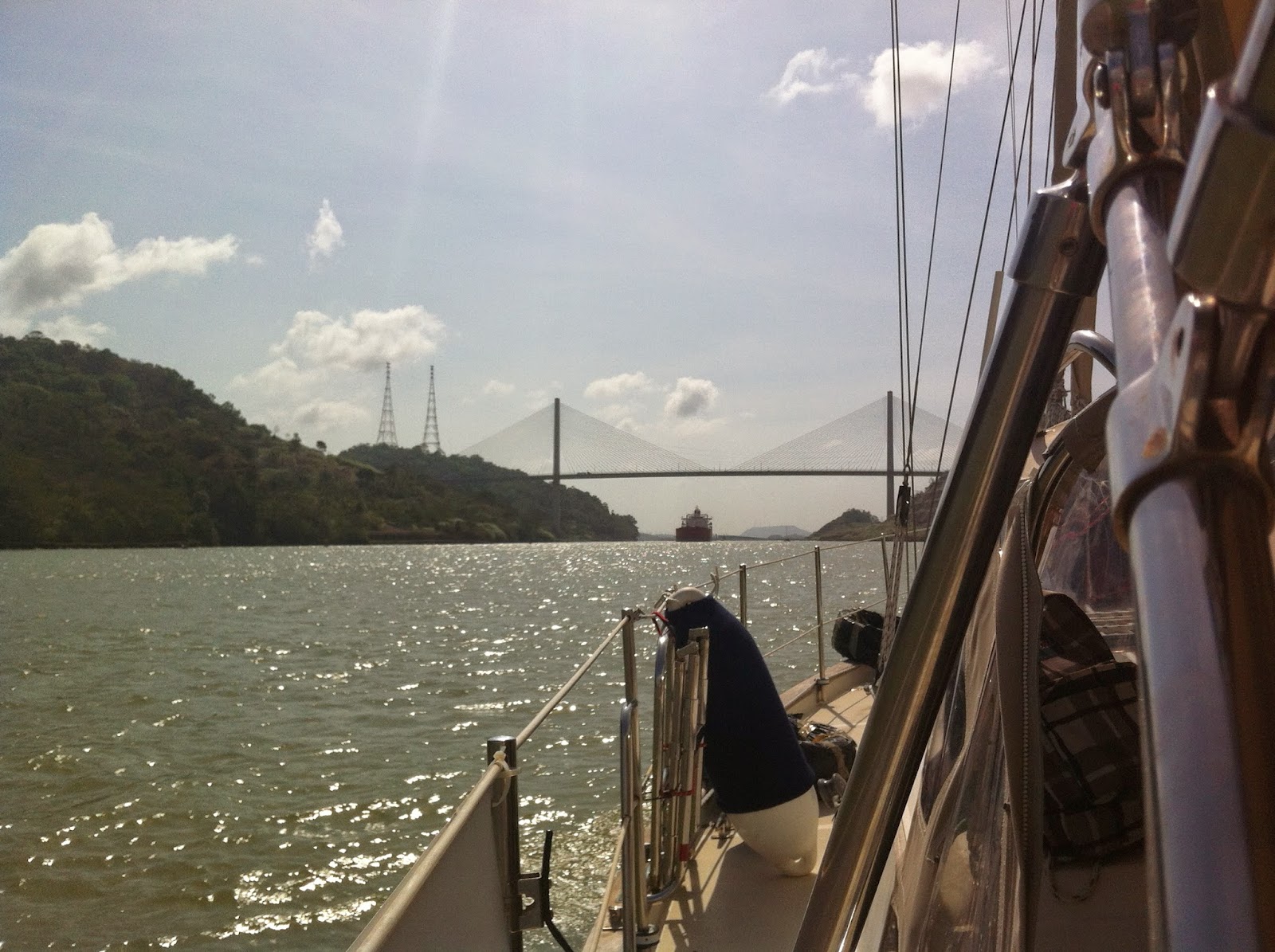 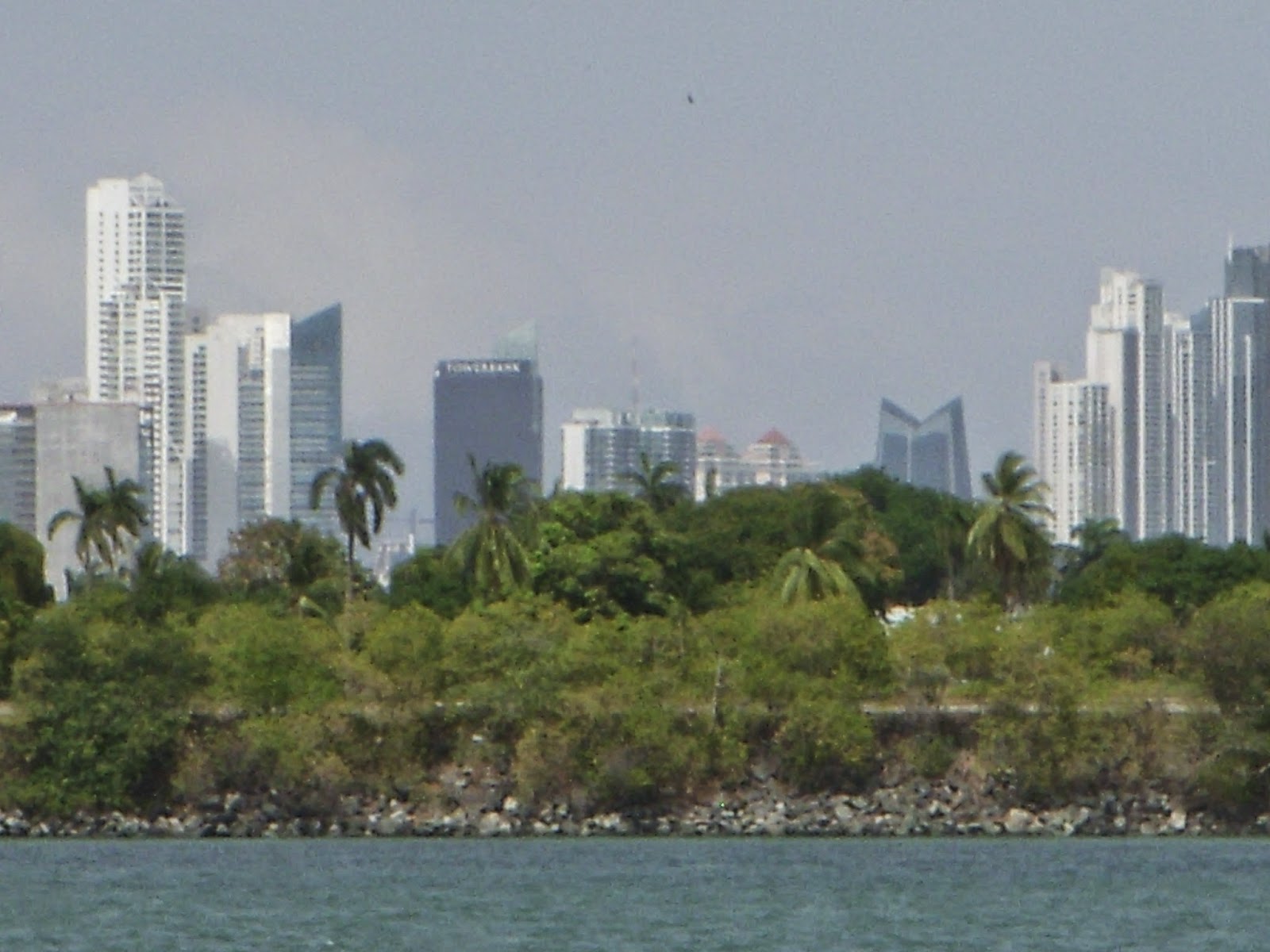 Panama City from the canal